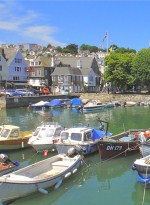 Dartmouth is the loveliest of the South Hams towns, and well deserves its reputation as the jewel in Devon's crown. The mere mention of South Hams brings to mind images of beautiful countryside, woodland and river scenery, seascapes, superb beaches and pretty rural villages. The town is full of individual shops in cobbled walkways and arcades; they are a mecca for arts and crafts lovers, and a place to savour the finest of local produce. This area of South Devon is, in addition, blessed with a mild climate, nestling beneath the sheltering splendour of Dartmoor, and as such is ideal for the plethora of walkers, keen cyclists and sailing enthusiasts who are drawn here every year. Dartmouth, a deep water port, is one of the area's finest attractions and has a continental feel about its steeply rising streets and flights of winding steps where shoppers linger around the specialist shops and art galleries, and enjoy a drink or a meal at one of the many fine bistros, bars and restaurants.

The River Dart snakes through the wooded hillsides and the myriad colourful craft on the blue waters seem to transport you to more exotic climes. Strolling is the order of the day here - it's a pity to rush. Take your time as you wander along the main embankment that runs through the town from New Quay towards Bayard's Cove. On the busy estuary, why not step on board a boat for the many trips that ply back and forth - a riverboat ride to the ancient river port of Totnes, for example, is particularly charming.

As you stroll around Dartmouth you will sense in the narrow streets and buildings an atmosphere reflecting the town's long history. Admire the 17th-century Butterwalk with its impressive restored timber-framed facade, cobbled Bayards Cove, which, often featured in TVs The Onedin Line, looks much the same as it did in the 16th Century. The ancient harbour has been a point of departure for around 1,000 years. Dartmouth Castle, about a mile out of town overlooking the Dart, is a fortress constructed specially for artillery and for six centuries protected the town and its wealthy merchants from marauders - gaze down from its walls and you can see why this is a superb natural harbour. Dartmouth proves a draw to those who relish quieter and cooler seasons, while in summer, festivals, fairs, sailing and watersports bring Dartmouth thrillingly alive.

Kingswear is the home of the Royal Dart Yacht Club and sits on the Dart estuary opposite Dartmouth. With its brightly painted houses it has a Mediterranean feel, with two great pubs, a village store and a post office, it is always busy. It’s a great spot to stop and watch the comings and goings on the river. With one of the biggest marinas in Devon there is no shortage of beautiful yachts to admire. 19th Century villas overlooking panoramic views of

the village’s historic neighbourhood winding streets lined with friendly shops, traditional pubs and fine restaurants. On the outskirts of the village stands the 15th century castle and to really complete the feeling that one has travelled back in time, Kingswear is also the terminus for the Paignton and Dartmouth Steam Railway. With beautiful walks only moments away, an inherent love for art and music and genuine flair for hospitality, Kingswear is an ideal place from which to explore the surrounding area.

Brixham is a vibrant and friendly seaside town and thriving fishing port on the south-west coast of Devon. Nestled on the beautiful South-West Coastal Path in Devon, Brixham has historic forts, a national nature reserve, museums and a replica of Sir Francis Drake's ship, the Golden Hind, as well as a myriad of shops, boutiques, cafes and restaurants where you can sample the local produce.

With its two distinct areas, Cowtown and Fishtown, Brixham has a number of annual events to celebrate its rich history. In summer, the Cowtown carnival alludes to the area’s farming origins, and in Fishtown, by the harbour, Fishstock celebrates food from the sea with local chefs supplying ideas, tasters and demonstrations along with live music and entertainment. Then there is the annual Pirate Festival which competes for the title of most pirates in one place. For more information on these and other events and festivals throughout the year please visit www.theenglishriviera.co.uk

With its seaside attractions, brightly coloured fishermen’s cottages and stunning views over Tor Bay and across to Portland, Brixham offers residents and visitors alike a vibrant community and appealing home by the sea.

Dartmouth is linked to Kingswear, on the other side of the River Dart, by three ferries. The Higher Ferry and the Lower Ferry are both vehicular ferries. The Passenger Ferry, as its name suggests, carries only passengers, principally to connect with the Paignton and Dartmouth Steam Railway at Kingswear station. The nearest bridge across the Dart is in Totnes, some 11 miles away by road. The A379 road runs through Dartmouth, linking the town to Slapton and Kingsbridge to the southwest and to Brixham and the rest of Torbay to the east across the Higher Ferry. The A3122 connects Dartmouth to a junction with the A381, and hence to both Totnes and a more direct route to Kingsbridge. First Devon & Cornwall provides local town bus services and links to Totnes, Torquay, Kingsbridge and Plymouth. Stagecoach Devon provides links to the Torbay resorts of Brixham, Paignton and Torquay from Kingswear via the ferry. No railway has ever run to Dartmouth, but the town does have a railway station although it is now a restaurant. The railway line to Kingswear was opened in 1864, the original plans for the Dartmouth and Torbay Railway line took the line across a bridge and into the town. Opposition from local seamen and merchants saw the route diverted to Kingswear on the opposite side of the river, but this occurred after the station had been built at Dartmouth. The railway terminated at a station called "Kingswear for Dartmouth" (now on the Paignton and Dartmouth Steam Railway) and a ferry took passengers across the river to the station at Dartmouth railway station, which had a dedicated pontoon. British Railways closed the line to mainline passenger trains in 1973, but re-opened as a heritage line and has run as one ever since.

On the outskirts of the town is the Royal Navy's officer training college (Britannia Royal Naval College), where all officers of the Royal Navy and many foreign naval officers are trained.

Dartmouth has one secondary school - formerly Dartmouth Community College, now Dartmouth Academy - an all-through school for those aged 3–18, and two primary schools. Dartmouth Community College and Dartmouth Primary School are part of the Dartmouth Learning Campus; as of September 2007, Dartmouth Community College is part of a federation with Dartmouth Primary School and Nursery, meaning that the two schools share one governing body for pupils aged 1 to 19. Dartmouth also has a pre-school in the centre of town, established for over 40 years and based in the old Victorian school rooms at South Ford Road. It provides care for 2- to 5-year-olds and is run as a charitable organisation. Kingswear has a small friendly primary school that is perched on a hillside overlooking the river Dart, in this beautiful part of South Hams in Devon. With 70+ pupils where all the teachers know all the children. They welcome children of all abilities and take children from 3 years upwards with a Foundation Stage Unit.Brixham primary schools include; Brixham Church of England, Eden Park, Furzeham Primary and Nursery School, and St Margaret Clitherow Catholic Primary School. Secondary schools include Brixham Community College and Churston Ferrers Grammar School.

Moorings are available through the Dart Harbour and Navigation Authority also at Darthaven an independent family owned and run Marina in Kingswear providing 'in house' repair services and Chandlery and Noss Marina which is located on the eastern side of the River Dart and lies just above Dartmouth. Whilst secluded, it is within easy reach of the town either by water taxi, dinghy or foot and ferry. The marina provides fully serviced pontoon berths and also has a number of river moorings.

"We cannot thank you enough for all your efforts and friendly advice my wife and I received during the purchase of Wisteria Barn. Moving our family down to Devon was a little stressful, however, you both made it far more pleasurable due to your kind words and help. Our purchase took longer than we had hoped, yet it could have taken far longer without your help jostling it along. Your responses to our enquiries were always prompt, if not immediate and was a ray of sunshine in all the grey haze the solicitors produced. Then to top it off you were there at completion with our key, a bottle of bubbly, and a surprise gift. We could not have asked for better service. If only the rest of the chain had you involved we would have moved in months ago. We would highly recommend you to anyone and wish you all the success for the future that you truly deserve, thanks again."
Gareth & Anya